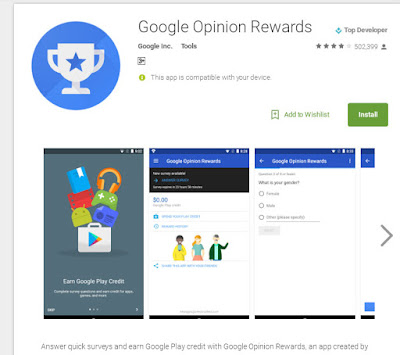 Google Opinion Rewards app comes with a lot of rewards for users. When a user successfully completes a survey, the Google Opinion Rewards app gives Google Play credits. The amount you won can be redeemed in the Google Play Store for premium and paid content. You can spend the amount for any paid content, no limits apply and the user is free to explore any paid content from apps to movies via this amount. To make sure you are eligible for the survey, the user needs to first sign up and provide basic information, based on which the surveys will be shared to you.

Google provides different cash payouts for different users in different regions. Google Opinion Rewards for India rewards begin at Rs 10. Although you can get more for other Google surveys.Google Consumer Survey platform is open to all advertisers and third-party users. Earlier, Google had asked users to suggest names for Android N via the platform, before finalizing on Android Nougat via Google Surveys.

A user had to answer a series of questions. Some are multiple choice question options, others ask users to type out their opinions in detail. There is no specific number of questions fixed in a survey. The payout amount can vary based on the advertiser, the length and type of questions asked. You need to sign in to your Google account before you can use the Google Rewards app.

Google has previously shared many successful case studies of various companies using the Rewards app to engage with audience and improve their services or products. This has helped many brands understing their consumers better and thus offered products and services accordingly. “Answer quick surveys and earn Google Play credit with Google Opinion Rewards, an app created by the Google Surveys team.” tells the description of this Google Android Opinion Rewards app.

Surveys often comes once weekly, although users could be presented with multiple surveys in a week or could also face lean weeks when there are no surveys. Google Opinion Rewards app reviews are 4 Stars on Google Play so mostly are positive. Not to mention this is not a fake app but a app from Google, the name is enough.
Tags # google opinion rewards app download # google opinion rewards india
Whatsapp