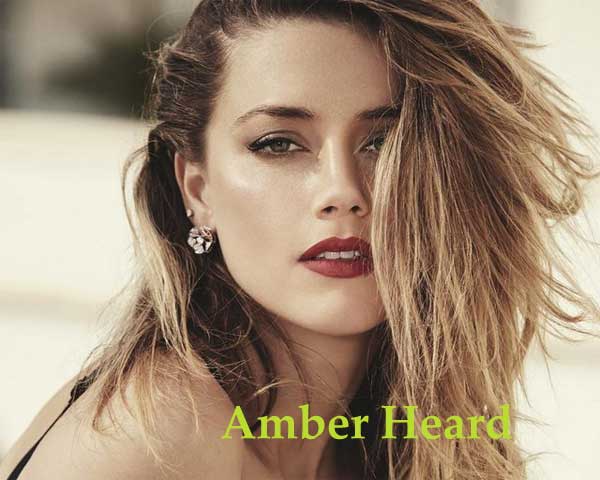 American actress Amber Heard is best known for her appearances in the films Pineapple Express and Aquaman. Here’s Amber Heard’s net worth and how she makes her money.

Amber Laura Heard, born on April 22, 1986, in Austin, Texas to mother Paige Parsons and father David Heard, had great passion for acting that is why at the age of 17, she dropped out of high school to pursue her dream. She is 5 feet 7 inches (170 cm) tall. She has a sister named Whitney Heard. Working as a model and actress in Los Angeles, her first role was in the pilot of a 2004 television show "Jack & Bobby". Her debut film was Friday Night Lights, in which she played the role of Maria. She appeared in several films and television shows. Amber Heard played the character Greta Matthews in the television series Hidden Palms. She also worked in shows like Criminal Minds, The Playboy Club, Californication.

Heard has been linked to actor Sean Penn and Tesla co-founder Elon Musk. Amber Heard actress married actor Johnny Depp in 2015 but they divorced in 2017.

Despite acting in Hollywood films, Heard also earns money as a producer. Heard co-produced the film And Soon the Darkness in 2010. She executive produced the film Syrup in 2013. So apart from acting, she earns money as a Producer and she also do product endorsements. Heard in 2015 earned $120,000 after endorsing Tiffany (jewelry brand) and $50,000 with Bulgari (jewelry brand). She has also done commercials for brands like  L’Oreal, GUESS Jeans, BB Cream.

Heard in an interview with Porter magazine said she was hesitant to work in Aquaman. Heard thought that the role of Mera would be a “hypersexualized” comic-book figure, “dreamt up by some 14-year-old and as complex as one that a 14-year-old boy could imagine.” She said that playing the role of Mera would be opposite to what she stands for. She owns a 1968 Ford Mustang and a 1967 Mercedes 250SL.

Amber Heard net worth is estimated to be $9 million.

Amber Heard was in a disturbing relationship with Johnny Depp. Both stars accused each other of physical abuse. Depp submitted 87 surveillance videos to support his defamation case against his ex-wife. Depp said that he was not only abused by Heard but she also attacked him on several occasions, one of the incident he mentions is a bottle of vodka thrown at him. His said that the bottle severed middle finger on his right hand and shattered the bones, which required surgery.

Now, as their divorce is finally settled. The couple released a statement which confirms the settlement including the domestic violence petition filed by Heard. Some people claimed that Heard had just done that for financial gains, and some even called "gold digger" to describe her. Heard and Depp's joint statement said that Heard is donating her divorce settlement money to charity which is around $7 million. In their statement, both said that no false accusations were made just for financial gains and both of them had a passionate and lovely relationship.

Heard's friend, iO Tillet Wright mentioned, "Right now, every battered woman in the world is watching this media circus, internalizing the message that when they come forward for help, when they break the cycle, they will be called a gold digger, a cheater, and be accused of having faked it all for attention."

Depp has a bigger net worth than Heard. Depp is worth $400 million, and Heard is worth $9 million. All knows that Depp has starred in big-budget movies as compared to Heard's new career, doing smaller films. She could have asked for more (she earlier asked for $50,000 per month as spousal support but withdrew the request), and she is only taking $7 million and that too giving it to charity.

Amber Heard is involved with charity work, one of them is the "The Children’s Hospital of Los Angeles" where she has worked for more than a decade. She is listed on the Honor Roll of Donors site, a prestigious achievement which is for only those people who have donated between $1 million and $5 million in a year.

Email ThisBlogThis!Share to TwitterShare to FacebookShare to Pinterest
Labels: amber heard net worth, net worth