How to buy Suvidha Sanitary Napkins at One Rupee

How to buy Suvidha Sanitary Napkins Online at One Rupee 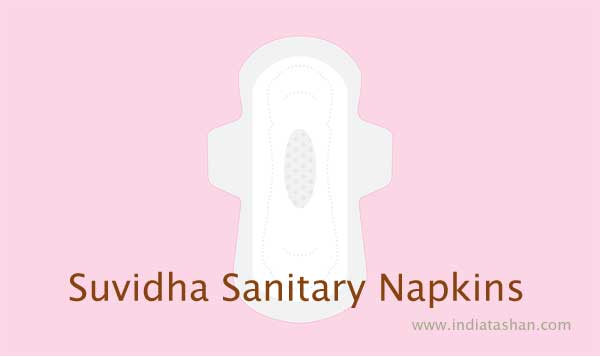 Government has reduced the price of sanitary napkins sold from its Jan Aushadhi Kendras from Rs 2.50 to just Re 1 per piece. The biodegradable sanitary napkins named 'Suvidha' are available at Rupee 1 price at designated centres from August 27, Minister of State for Chemicals and Fertilizers Mansukh Mandaviya said in an interview in Ne`
Jan Aushadhi Suvidha Oxo-Biodegradable Sanitary pads are sold in a pack of four which costed Rs 10 uptill now. Now, from Tuesday i.e 27th August 2019, they can be bought for Rs 4 only.

Mandaviya said, "We are launching Jan Aushadhi Suvidha Oxo-biodegradable sanitary napkins at Re 1 from August 27. These napkins under the brand name Suvidha are available at 5,500 Pradhan Mantri Jan Aushadhi Kendras (PMBJK) across India".

After the prices of these napkins are decreased by 60 per cent, Modi government has fulfilled the promise made by the BJP in its manifesto for 2019 general elections.

"Presently, the manufacturers are supplying the bio-degradable Suvidha sanitary napkins at their cost of production. Now the Govt. provides subsidy to bring down the retail price of Suvidha Napkin," said Mandaviya. The biodegradable sanitary napkins scheme was announced by Modi Govt. in March 2018 and from June 2018, these Suvidha sanitary napkins were made available in the Jan Aushadhi Kendras. The Government of India launched “Jan Aushadhi Suvidha Oxo-Biodegradable Sanitary Napkin” at Rs 2.50 per pad on the eve of the World Environment Day 4th June 2018.

He said, "Around 2.2 crore sanitary napkins have been sold from these stores in the last one year. As the prices have been reduced to Re. 1, sales for Suvidha pads is expected to jump over two times. The focus is on quality, affordability and accessibility". If you see the average market price of a sanitary napkin, it is priced between Rs 6-8, and the biodegradable sanitary pads at Rupee 1 will give a major boost for empowering the women of India. This can be called as a massive push for women hygiene and also fulfills the vision of Modi Govt. “Affordable and Quality Healthcare” for all. The Government is making sure that there is no diversion of these subsidised Suvidha napkins.

As per National Family Health Survey 2015-16, about 58 per cent of women aged between 15 to 24 years use locally prepared napkins, sanitary napkins and tampons

About 28 million girls are reported to be leaving education because of lack of availability of good quality Sanitary Napkin pads at reasonable cost. The Suvidha napkin has a special additive which makes it 100% biodegradable when it reacts with oxygen after it is used and discarded. With Suvidha sanitary napkins, government aims to make the significant product affordable for underprivileged women. 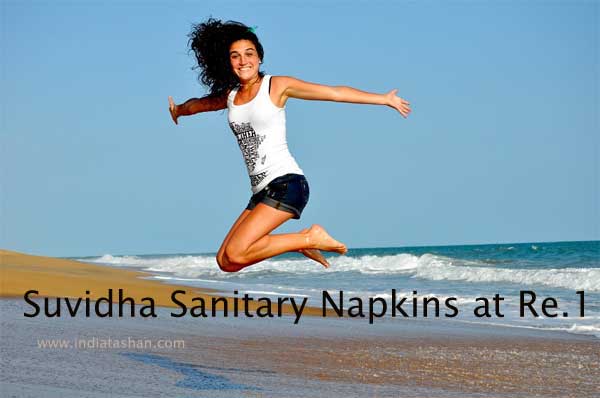 About 78% women in urban areas use hygienic methods of protection during menstrual period; only 48% women in rural areas are able to use clean sanitary napkins. Majority of women use unhygienic products during menstruation, such as wood shavings, fibres, and old dirty clothes that may cause fungal infections, Reproductive Tract Infection, Urinary Tract Infection, cervical cancer and also make women vulnerable to infertility. The disposal of non-biodegradable sanitary napkins which mostly is been used by urban India creates a huge environmental problem.

As per Menstrual Health Alliance India, an NGO, sanitary napkins constitute over 45% of menstrual waste, disposed off along with other household garbage. This causes a major health hazard. The data also reveals that in urban areas, 13% of menstrual waste is thrown in open spaces such as rivers, wells, lakes and by the roadside, while 10% waste is disposed of in toilets, 9% is burnt and 8% buried.

Janaushadhi Sugam is a mobile application which has user-friendly options like- to locate nearby Janaushadhi kendra, location of the Janaushadhi kendra through Google Maps, search Janaushadhi generic medicines, analyse product comparison of Generic vs Branded medicine in form of MRP & overall Savings, etc. The mobile application is available on both Android & iOS platforms. It can be downloaded free of cost by any smartphone user from Google Play Store and Apple Store.
Tags # suvidha sanitary napkins # suvidha sanitary napkins online
Whatsapp